Move over carbohydrates, time to welcome back saturated fats

I predict that over the next decade or so, the information we in the west have been given about the risks of eating saturated fats in our diet will slowly but surely be discredited.

This isn’t going to happen overnight. A great many reputations and vast amounts of money have been staked on saturated fat being at the root of our health ills: heart disease, diabetes, obesity and cancer. It’s going to take time for the establishment that has continued this myth – at great cost to human health – to be dismantled.

In the meantime, information about the poor quality of this guidance is gradually moving into the public domain and last night on PM – Radio 4’s daily current affairs show, Becky Milligan broadcast a piece that neatly summarises some key points about the current thinking on saturated fat and carbohydrate.

Becky reported that today in Britain, 1 in every 7 deaths is attributed to poor diet. And the biggest culprit within these harmful dietary choices? The answer to that one is easy, we’ve had it drummed into us for as long as we can remember: 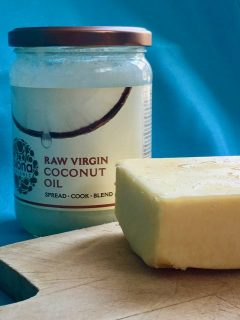 Over the last four decades, there’s been an open and shut case against saturated fats. It has been a fact universally acknowledged that these fats are the cause of increased rates of heart disease, cancer and obesity.

In spite of the plethora of advice from government and health agencies to eat a low-fat diet however, the “obesity epidemic” has continued unabated.

In addition, there has been no reduction in the incidence of heart disease and levels of diabetes have rocketed.

Is this due to our inability to follow the advice? Is it our complete lack of self-control when it comes to eating the correct foods in moderation?
Well according to Dr Roy Taylor, Professor of Medicine and Metabolism at Newcastle University, this “fact” about the dangers of saturated fat has no more substance than rumour and goes as far as saying:
“there has never been any scientific basis to it”

This is a pretty shocking revelation and implies that the dietary advice the western world has been given over the past 40-50 years has quite simply been incorrect and based on astoundingly bad science. The detrimental effect that this guidance has had on human health is beyond belief but let’s not go there now.

The REAL culprit?
It seems that a more likely cause of our ills is down to a well-known hormone that controls the levels of sugar in the blood:
INSULIN
As Jason Fung, a Canadian kidney specialist explains, insulin tells the body what to do with its food energy – or fat.
When insulin levels are elevated, the body will store fat. When the levels are low, the body will burn fat.
Bread, potatoes, pasta, rice and sugar in any form will all stimulate insulin production
So if we’re trying to burn fat rather than store it, we need to avoid raising insulin levels. And to do this, we need to avoid refined carbohydrates and sugars.(And the more refined a carbohydrate is, the more it will stimulate the insulin response; so for example, white rice will have more of an effect on insulin than brown).
Want to slim down? Cut down on the carbohydrates. Not only this – and here comes the earth-shattering bit which is just hinted at in the final clip of the BBC report:
To maintain a healthy body weight, eat more saturated fats.

Note however, that alongside an increase in saturated fat intake, it is assumed that there is also little or no consumption of refined carbohydrates. The combination of high levels of fats and carbohydrates in the diet is a guaranteed way to pile on the pounds!

Far from being the health risk we have been told they represent, saturated fats are in fact good for you. Why?

They do not cause the body to deposit fat tissue
They do not increase insulin levels
They increase levels of good (HDL) cholesterol
They are key players in the metabolic process, essential for the healthy functioning of every cell in your body.
They have no association with an increased risk of cancer.
They even seem to protect against risk of stroke.

And this list of benefits is far from exhaustive. It appears that pre- and post-menopausal women in particular can damage their health by eating a diet that is very low in saturated fat. Babies and young children suffer developmental delay if they have insufficient fat in their diets. It is also associated with a “feel good” factor as it seems to play a part in balancing serotonin levels. I could go on but I won’t.

It’s time for a dietary rethink.

Listen for yourself here: Radio 4 PM programme, broadcast 14 May 2019